The Mysterious Kingdom of Fungi

Professor Lynne Boddy talks about fungi, what they are, what they do and why we need them.

Most western countries are fungi phobic – we have a deep fear of mushrooms, most likely because they were associated with witches, poisoning.  Many cultures (especially in eastern Europe) still possess the knowledge (and lack the fear) of fungi – what to pick and what to leave well alone.  Fungi are everywhere and the world would not exist without them.  They are nature’s recyclers, and they are also used in many processes that produce food, chemicals and drugs.

Have a listen to this great programme from the BBC World Service: Professor Lynne Boddy talks about fungi, what they are, what they do and why we need them.

Jens Petersen, a Danish photographer and mycologist, talks about the functions of fungi, and his trips around the world to photograph them. 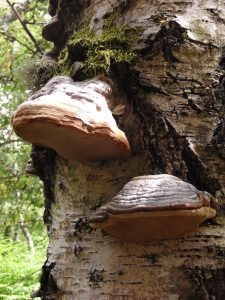 San Francisco resident Phil Ross makes furniture from fungi, chiefly Ganoderma lucidum, and sees a future in which more and more everyday items are made from fungi.  These items would be truly sustainable.

When carrying out tree inspections, we look out for fungi that may be causing a tree to be unsafe; however tree consultants should not be jumping in alarm because they find a fruiting body or two.  Fungi are everywhere – they always have been and they always will be.  They have a significant and irreplaceable role in the natural environment, and we should be conserving them where possible.

Listen to the programme here.